His best known alter-ego, Miguel Mantovani, is the tantastic chief of Hermanos Cubanos – aka the Cuban Brothers. They are the ‘tache-sporting, thong-donning comedy quartet straight out of a ‘70s Havana disco whose triumphant stage concept involves a blend of naked breakdancing and Latino soul.

The CBs, which comprises all of the Cuban Brothers plus some ‘extra dope players: Sizzla, Greg Bone, Mags and The Stella Horns’ are, in Keat’s words, a cross between ‘the Bay City Rollers, Donny Hathaway and Public Enemy.’

When was the CBs concept born, and how long have you been playing music together?

‘The CBs were born when I put a live outfit together to support the Godfather of Soul, Mr James Brown, on a six-date tour of Australia in 2005, and have been playing together for five years.’

Who in the band does what?

‘I write the songs, sing, MC, while stickman extraordinaire Aid Meehan and Mags arrange and the three of us produce. The other cats play their respective shits.’

Was it your intention to do something quite different to Cuban Brothers?

‘I was aware that there might be a stigma attached to the Cuban Brothers’ name and that some cats might write the music off as some comedy moustache, naked, cock-as-a-wristwatch kind of shit, and a lot of tunes I was writing were straight up soul, funk, hip hop and didn’t really suit the Cuban’s sound. I just wanted to put some nice music out without my ballsac.’

Your cover of Misdemeanour is brilliant. Why did you choose that song?

‘It’s a stone cold classic. I’ve always loved the break, it’s hip hop as fuck plus Foster Sylvers was only 12 and had the young MJ falsetto thing going on.’

Can we expect a CBs album in the pipeline?

‘Absolutely. In April the CBs album, The Finding, will be out on Jam City – 12 tracks of joy featuring some very special guests. The next single is also called The Finding and is very funky indeed. In fact if you put a pair of tramp’s scants in an airing cupboard for a week and then fermented them in cider vinegar you still wouldn’t come close to the fonk. Telling you!’

Will we be seeing CBs stripping and breakdancing on stage?

‘B-boying is instinctive. You can’t help it after 25 years and me, Kengo and Arch are B-boys for life so probably.’

Where do you currently live in London and why?

‘Willesden, because it’s near Harlesden and not far from Neasden and a hop, skip and a pump from the mighty Kilburn.’

Who are your musical influences?

Does this spell the end of Cuban Brothers, or are they just taking a break?

‘No the Cuban’s are on the road nine months of the year with a sketch show out this year and we’re hosting the mighty Bestival, Snowbombing, Good Vibes in Australia and have a slew of summer singles. Fantastico my friends I just can’t stop the touching.’ 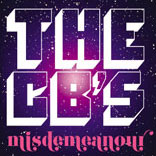 The Multi-Story Orchestra Performs ‘I Am I Say’

My London: Heretic, DJ and Producer

The former editor of Miami webzine MOLI, Pacha Magazine, Ibiza, and quarterly glossy West End Review can invariably be found lurking beneath the darkness of many a London club or screening room scribing music, culture and lifestyle features for print and the world wide web. Ms Vaseline loves cats, custard tarts and frolicking in fields to hammer 'n' tongs industrial techno. Today she is the founding editor of The London Word - her literary labour of love - and she is penning her magnum opus; a novel of Victorian gothic proportions.